Today, we will check out the predictions and upcoming match preview for the League One match between Charlton and Plymouth.

These are the top predictions our betting experts came up with regarding the upcoming Charlton vs Plymouth fixture.

All odds are from Ladbrokes and are subject to change. Before continuing, make sure to double-check them via your bet slip.

When we looked at the matches between Charlton and Plymouth, we saw that many of the recent ones ended with clean sheets. That includes three of the last five fixtures they played against each other. Also, in Charlton’s most recent fixtures the “no BTTS” outcome seems to be prevalent with four of their last five fixtures ending that way. For Plymouth, two of the last three matches they played ended without both teams scoring goals, as well.

Although Charlton seems to be doing well now in terms of recent form, they did start the season in the relegation section and struggled to get out. Plymouth is the current table leader with thirty-six points, which is seventeen points ahead of Charlton at the moment. Also, Plymouth lost only one match this season out of the seventeen they played in total, so we are rooting for them to win on Saturday, too.

Charlton seems to be at a disadvantage against this particular opponent not only in terms of table placement but also when it comes to injuries. Jake Foster-Caskey who plays as a midfielder for Charlton is still out because of the cruciate ligament injury he suffered in May this year. At least there aren’t any suspended players, although Jayden Stockley is at risk with four yellow cards. On the other hand, Plymouth doesn’t have any injured or suspended players on their roster, so they will be playing at full force on Saturday.

In these tables, you can check out the most recent statistics and match histories for the upcoming Charlton vs Plymouth fixture. 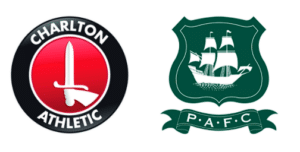