After years of the Premiership being one-sided we finally have a title race. Will Celtic keep the heat on their city rivals with another win here? Find out with our Celtic vs Dundee United preview here along with the predictions and free tips we mention along the way.

Celtic to lead at the interval

Dundee United have found their footing recently; they are coming off consecutive wins, and have scored in their last four games. Conversely, Dundee United have not done a very good job defensively; they’ve conceded in all of their last nine games. Just like Dundee United, Celtic have not had too much trouble scoring goals; they’ve done so in their last four, and 15 of their last 16 games. The Bhoys have conceded their fair share of goals, they’ve allowed at least one goal in five of their last seven games. Both teams have scored in all of Dundee’s last four games, and in five of Celtic’s last seven games. For this reason, we believe that both teams will find the net.

Celtic have been the highest scoring team in the Premiership this season; they’ve averaged just over 2 goals per game in the league. Celtic’s games have mostly been high-scoring because of that; five of their last seven games went over the 2.5 goal line. In the same vein, Dundee United have scored and conceded a lot of goals recently with their last four games going over 2.5. It’s also worth mentioning that eight of the last 11 clashes between these teams went over 2.5. With this in mind, this will likely be a high-scoring affair.

The best odds for Celtic vs Dundee United

Celtic are coming off four consecutive wins in two different competitions; they have no losses in their last 12 games, with 11 wins and a draw. The Bhoys will be eyeing their fifth win in a row as they host a struggling Dundee United side; Kyogo Furuhashi will be the man to watch.

Dundee United snapped their eight game losing streak with back-to-back wins in two competitions over the past seven days; they have a tough task ahead of them: playing a hot Celtic team on the road. Thomas Courts’ men will hope they can upset one of the best teams in the country; it’s worth keeping an eye on Tony Watt.

The final word on Celtic vs Dundee United 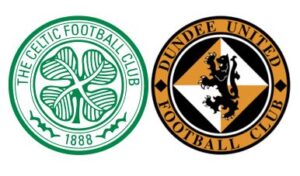