Let’s go over the Cambridge vs Wigan match this Tuesday and see if we can guess the top predictions and free betting tips for the match.

Below, you can check out the latest predictions and free betting tips and odds for the Cambridge vs Wigan fixture on Tuesday.

All of these odds are from Ladbrokes and are correct at the time of writing. Before wagering, make sure to double-check your bet slip because all odds are subject to change.

There have been a lot of BTTS outcomes involving Wigan, Cambridge or both, so we will list only a few of them here. For example, three of the last five matches for Wigan and Cambridge in League One ended with both teams scoring goals. Also, in all the six matches they played against each other the matches ended with a BTTS outcome.

Wigan is the favorite in this match-up for many reasons, including the fact that they won or drew all five of their latest matches, while Cambridge won only one of the last five fixtures they played regardless of the tournament. The cherry on top is that Wigan won three of the last five matches they played against Cambridge. Those are enough reasons for us to believe that Wigan will beat Cambridge to claim the three points and battle for the first position in the table.

Out of both teams, we have only one injured player that won’t be able to make it to the game on Tuesday. Wigan’s Gwion Edwards has been out with thigh problems for more than a year now, and we don’t have an exact return date for him yet. Cambridge doesn’t have any injured players and there are no suspended ones either. When it comes to suspensions, Wigan also doesn’t have any suspended players, but two of their own are at risk of suspension with four yellow cards – Max Power and Charlie Wyke.

These statistics and odds are for the upcoming Cambridge vs Wigan match on Tuesday. 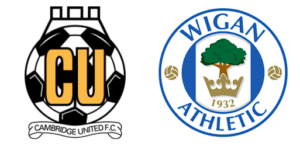