The only match of the upcoming round of Scottish FA Cup that’s scheduled for Friday is the Broomhill vs Alloa Athletic duel. So, we have prepared a preview of this game for you, along with some free betting tips.

If you are not sure what is the right bet for the Broomhill vs Alloa Athletic duel, check out favourite betting tips for the game here:

Alloa Athletic to Win with Handicap (-1)

While Broomhill is currently competing in the Lowland League, the fifth rank of Scottish football, Alloa Athletic is in League One, which is the third rank.

So, the difference in quality between these two teams should be pretty obvious given their difference in stature and with that in mind, we expect Alloa Athletic to win this game by two or more goals.

These two teams didn’t meet in recent years, so we don’t really have any h2h data to help us make our next prediction. Despite that, we expect to see at least three goals in this match.

After all, we do expect the guests to win by two or more goals and while the home team is doing ok in their league this season, this will be a tough matchup for them. Also, Alloa Athletic is averaging 3.63 goals per game this season, which bodes well for our prediction.

Since we expect to see three or more goals in this game and we also expect Alloa Athletic to win by two or more goals, we can see this match ending 3-0 for the guests.

Granted, betting on correct score is always risky and that’s why the odds are so high, but we feel it’s worth taking a punt at this market sometimes, so that’s our last prediction for this match.

The best odds, stats, and more for Broomhill vs Alloa Athletic

If you don’t want to waste time looking for the top Broomhill vs Alloa Athletic odds, take a look at them right here, on our site:

Broomhill vs Alloa Athletic preview: An easy job for the guests?

With three losses in the last four games in Lowland League, the fifth rank of Scottish football, Broomhill is clearly not in great form at the moment. Overall, the team is eighth in the standings, which is pretty solid and they are actually not that far behind from much better positions in terms of points, although the top team in the league is nine points ahead of them.

In the last six games in League One, Alloa Athletic has three wins, one draw, and a couple of losses. Thanks to this form the team reached fifth place in the standings and they are currently just one point behind a place that would take them into the promotion playoffs, which would be a good achievement for them.

The usual questions for Broomhill vs Alloa Athletic 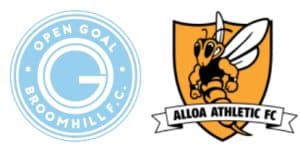