These two are both huge clubs but they’re fighting at different ends of the table right now. Who wins when they face off with each other? Find out with our Bolton vs Sunderland preview here along with the predictions and free tips we mention along the way.

The best odds for Bolton vs Sunderland

Bolton won back-to-back games in the last two weeks; as a result, they’ve moved up five spots in the League One table, and are now five points clear off the relegation zone. Ian Evatt’s men will hope to string up three consecutive wins in the league for the first time this season; they’ll look to Oladapo Afolayan to lead the attack.

Sunderland defeated Portsmouth last weekend, putting an end to their three match winless run; they are now tied on points with league leaders Wigan, although they’ve played four more games. Lee Johnson’s men will need as many wins as they can get if they intend to win the title; all eyes will be on League One top scorer Ross Stewart today.

The final word on Bolton vs Sunderland 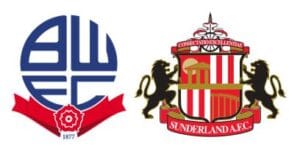