After playing three consecutive games at home, Lincoln are on the road against Bolton Wanderers for their next league trip. Following their 4-0 triumph over AFC Wimbledon The Wanderers will be keen to start where they left off in the last game.

Free Match Tips from Punditfeed for Bolton vs Lincoln

Here are some bias-free tips we have put together for Bolton vs Lincoln.

Bolton has been able to display some of the best results recently by winning seven of the last nine games, losing only one. But Lincoln are winless in the previous two duels and enter his game on the back of a home defeat. The Whites hold an incredible streak of five consecutive home wins and will be more confident with the last H2H victory against the Imps. Two of three meetings between these teams witnessed Bolton securing victory. So we back the hosts to retain their winning streak in this match.

Out next pick for this match would be a total of over 2.5 goals. Bolton are playing with an average of two goals per game from the last five games while the Imps have scored five goals in the same duration, leaking goals in every game. Two of the last three H2Hs of these teams also witnessed a high-scoring total.

Lincoln were unable to score in their last game but they hold the consistency of scoring in the away games. While on the other hand, Bolton didn’t miss the target in the previous nine games. The trotters also scored in all of the H2Hs against the imps. talking about the defensive lines, only the hosts have secured one clean sheet in the last game, leaking five goals in the recent five games. So we expect both teams on the scoresheet at the end of this match.

The White Men thrashed AFC Wimbledon by 4-0 and won their consecutive fifth home game in their last game. After playing 33 games of the current season, Bolton stands at the tenth position on the points table with 48 points. The central midfield Josh Sheehan will miss out on the coming game due to a cruciate ligament rupture.

The Imps got their third defeat in the duration of the last five attempts in their last game against Doncaster. Lincoln have registered only one victory in the last five matches. The lack of wins and a long run of defeats have put them at the seventeenth position in the standings. The Lincoln City boss Michael Appleton has zero players on the injury list ahead of this game.

Looking for the best odds for Bolton vs Lincoln? We’ve got you covered. Check out our list of odds from the popular bookies and a few important stats to help you make a good prediction.

FAQ about Bolton vs Lincoln 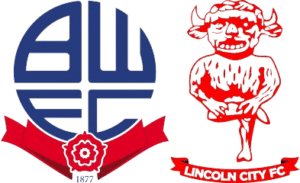 Where is the game being played? The University of Bolton Stadium.

What was the last H2H result? Bolton triumphed with a 0-1 scoreline.