Free Match Tips from Punditfeed for Arbroath vs Airdrieonians

Arbroath will be determined to get back on the winning track when they host Airdrieonians for the next fixture of the Scottish League Cup. The Diamonds come into this game after confirming a home victory.

Arbroath have been through a winning sequence before the last friendly game defeat, winning three of the last four. On the other hand, Airdrieonians have got a mix of results with two wins, two defeats and one draw. The Smokies have also earned three victories in the previous five home attempts. In the H2Hs, Arbroath held the domination by winning all of the last four meetings at home. Hence, we can expect the Red Lichties to fancy their chances in front of their home fans.

The Smokies have scored at least three goals in three of the last five home games, adding a total of 12 goals in that duration. On the other hand, Airdrieonians have also managed to find the back of the net eight times in the previous five attempts. Adding more, three of the last four H2Hs between these teams also went over 2.5 goals. Based on the given stats, we can predict this game to follow the trend and witness a high-scoring total at the end.

The front line of Arbroath has been consistent in the recent attempts and succeeded in finding the target in the last seven attempts consecutively. The Diamonds have also been quite the same by getting a streak of scoring in the previous six outings. Three of the last four H2Hs at the home of Arbroath also featured BTTS outcomes. So we predict the same trend to be followed in this game as well.

After the successive five unbeaten games, the Red Lichties conceded a victory of 1-2 against AFC Flyde in a friendly game. Nevertheless, the consecutive wins have got Arbroath to the top of the table of Group E with nine points. The team gaffer Dick Campbell will report zero injury issues in the team before this game.

The Diamonds confirmed their second victory of the Scottish League Cup campaign in the last game against St. Mirren with a 2-0 result. After three attempts, Airdrieonians are at the second of the table with seven points. Salim Koudier-Aissa will be out of this game due to a knee injury.

Looking for the best odds for Arbroath vs Airdrieonians? We’ve got you covered. Check out our list of odds from the popular bookies and a few important stats to help you make a good prediction.

FAQ about Arbroath vs Airdrieonians 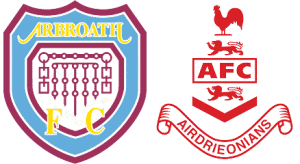 When is the kick-off time? The match will be played on July 23, at 16:00 GMT.
Where is the game being played? Gayfield Park (Arbroath).
What was the last H2H result? Airdrieonians won with a 3-0 scoreline.