Free Match Tips from Punditfeed for Airdrieonians vs St Mirren

Airdrieonians are out of their depth in their next Scottish League Cup outing as they host St Mirren at the Excelsior Stadium. However, the Saints have shown signs of preseason jitters, giving hope to the Diamonds faithful.

Airdrieonians have a one-point advantage over St Mirren as they trail Arbroath in Group E. They are masters of their own destiny but have odds stacked against them. The Premiership outfit are seething with vengeance and will look to make them pay. The last seven duels have concluded in favour of the Saints and we expect the trend to continue in their Round 3 meeting.

St Mirren will go into this fixture with the backing of the bookmakers. However, Stephen Robinson will be concerned with his side’s inability to score regularly. They have only scored twice in as many games, casting doubts over their abilities. While Airdrieonians have scored twice as much, akin to their rivals, they have also conceded just once. Four of their last seven duels have seen Under 2.5 Goals results and we anticipate a similar outcome to this encounter.

Interestingly, both Airdrieonians and St Mirren have preferred defence over the attack. Their approach has borne fruits with just one goal conceded apiece. As they meet at the Excelsior Stadium, we anticipate more of the same in their bid to catch up with Arbroath and to secure second place. Three of their last five duels have seen a clean sheet and we expect to see another shutout at the culmination of 90 minutes of regulation action.

After going down a goal behind, Airdrieonians wrestled their way to parity against Edinburgh. It got them a point kept them in the race for second place, but the defeat on penalties will sting. Rhy McCabe will want his charges to summon the same spirit against St Mirren, a team two divisions their senior.

Defeat to Arbroath in Round 1 threw a spanner in St Mirren’s works. The Saints can ill-afford to drop any more points and will want the Smokies to falter. While pole position is out of their grasp, all they can do in the time being is improve on their showing. Their defence needs to shore up as they have been found lacking, one more slip up and it will be curtains for their League Cup adventures.

Looking for the best odds for Airdrieonians vs St Mirren? We’ve got you covered. Check out our list of odds from the popular bookies and a few important stats to help you make a good prediction.

FAQ about Airdrieonians vs St Mirren 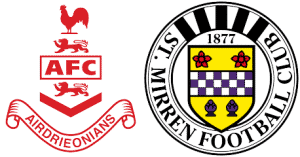 When is the kick-off time? The match will be played on July 19, at 20:45 GMT.
Where is the game being played? Excelsior Stadium (Airdrie).
What was the last H2H result? St Mirren won with a 5-0 scoreline.