Let’s check out the upcoming Accrington vs Fleetwood fixture that will be played on the 4th of December. If you want to see more League One predictions, you can check out our website.

Below, you can check out the most recent predictions and tips for the upcoming Accrington vs Fleetwood fixture this weekend.

All odds are from Ladbrokes and are subject to change. Before wagering, make sure to double-check the odds via your bet slip.

Although both teams are in a bind with one of the worst forms in the League right now, we think that Accrington will win because they at least won one match out of the last five, and Fleetwood hasn’t won a match in their last five fixtures. Accrington also won three of the last five matches they played against Fleetwood specifically.

Because of the recent high-scoring fixtures we encountered on both teams’ histories, we think that the match on Saturday has a great chance of ending with over 2.5 total goals scored, as well. For example, four of the last five matches for Fleetwood and Accrington ended with more than 2.5 total goals scored. Also, three of the last five games between them ended similarly.

Both teams have a few injuries to speak of for Saturday’s match. For example, Fleetwood’s Joe Garner and Brad Halliday are still out with their respective injuries and they won’t be back for Saturday’s match. Accrington only has one injured player on the roster – Yeboah Amankwah – who has been out for more than a year. There aren’t any suspended players on both sides but there are a few players at risk from both clubs.

When it comes to the outcome of the game, we think that Accrington will most likely win and the match will end with a high-scoring outcome and goals from both sides.

In these tables, you can check out the latest odds and fixture statistics for the upcoming Accrington vs Fleetwood fixture. 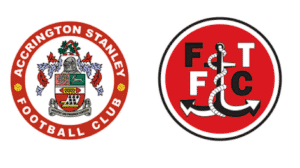