St Mirren arrive here with the odds stacked against them. Can they find a way to win? Find out with our Aberdeen vs St Mirren preview here along with the predictions and free tips we mention along the way.

Aberdeen will not win

Aberdeen have played 37 games this season, and they won just 10 of them; as a matter of fact, Jim Goodwin’s men have managed just two wins in their last 17 games across all competitions. While St Mirren have not done much better, they’ve been relatively better than Aberdeen recently; St Mirren have no losses in their last three games, a three game stretch where they did not concede a single goal. Additionally, St Mirren have done fairly well against Aberdeen in recent meetings; they lost just once in their last six encounters with Aberdeen. All things considered, we don’t think Aberdeen will win this match.

Aberdeen have not done a very good job defensively; they kept just one clean sheet in their last 17 games in all competitions. Conversely, Jim Goodwin’s men have scored their fair share of goals; they found the net in five of their last seven games, with eight goals scored in that stretch. To be fair, St Mirren did not allow a single goal in their last three games; however, it’s worth noting that they conceded 15 goals in five games prior to that good run. Furthermore, when these teams meet, both teams tend to score; five of the last seven clashes between Aberdeen and St Mirren saw both teams scoring. With this in mind, we believe that both teams will find the back of the net.

The best odds for Aberdeen vs St Mirren

Aberdeen’s woes continued with a loss at St Johnstone a couple of days ago; they’ve managed just one win in their last six games, with two draws and three losses. Jim Goodwin’s men will hope to end their disappointing Premiership campaign with a win as they host St Mirren; they’ll call on Lewis Ferguson to provide the goals.

St Mirren have improved a lot recently; they are unbeaten in their last three games, having lost five in a row prior to that. Steve Robinson’s men will look to extend their unbeaten run to four games today; it’ll be interesting to see how they’ll fare with Eamonn Brophy leading the charge.

The final word on Aberdeen vs St Mirren 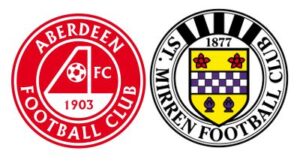