Neither of these teams are in very good form so there is little doubt the match won’t be a classic. Will anyone find a way to win it? Find out with our Aberdeen vs St Johnstone preview here along with the predictions and free tips we mention along the way.

Aberdeen to win it

Aberdeen are coming off three consecutive losses, and they have no wins in their last five games. However, despite Aberdeen’s poor form, they’ll be going up against the worst team in the Premiership today. St Johnstone have won just four games this season; as a matter of fact, they’ve won just one of their last 15 games. It’s important to note that St Johnstone lost 11 of those 15 games. Also, St Johnstone tend to struggle whenever they play against Aberdeen; they’ve won just one of their last seven clashes with Aberdeen. Considering Aberdeen won four of those encounters, Aberdeen should win today.

We’ve already established that St Johnstone have not scored a lot of goals when they play against Aberdeen; we should also mention that encounters between these sides tend to be on the low-scoring side. All of the last five clashes between Aberdeen and St Johnstone went under 1.5; as a matter of fact, they scored just three total goals in those five games. In the same vein, St Johnstone’s games have mostly been low-scoring; they’ve been by far the lowest scoring team in the Premiership this season. Four of St Johnstone’s last six games went below the 2.5 goal mark; on that note, we shouldn’t expect a lot of goals in this game.

The best odds for Aberdeen vs St Johnstone

Aberdeen have been going through a rough patch lately; they have lost three games in a row, in all competitions, and have no wins in their last five games. Stephen Glass’ men will hope to get back to winning ways as St Johnstone come calling; all eyes will be on Christian Ramirez today.

St Johnstone are coming off a 2:1 loss at St Mirren; things have not been going too well for them, as they’ve won just one of their last 15 games across all competitions. Callum Davidson’s men will fancy their chances against a struggling Aberdeen side; it’ll be interesting to see how they’ll fare with Chris Kane leading the attack.

The final word on Aberdeen vs St Johnstone 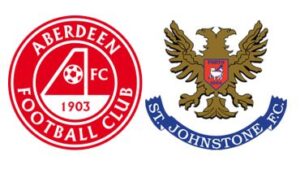