Rangers are unbeaten in nine and leading the charge for another title win. Can they keep ahead of their chasing rivals with a win over Aberdeen? Find out with our Aberdeen vs Rangers preview here along with the predictions and free tips we mention along the way.

Rangers to take the points

Goals for both sides

Rangers have been one of the best defensive teams in the Premiership this season; only Celtic have conceded fewer goals than The Gers. The thing is, they’re going up against an Aberdeen side that has scored in five of their last six games; as a matter of fact, Aberdeen have scored almost two goals per game on average in their last five games. Most of Aberdeen’s goals came at home, they’ve scored eight goals in their last three home games alone. It’s worth pointing out that meetings between these two have mostly been on the high-scoring side; all of their last four meetings have seen at least three goals scored, with three of those games going over 3.5. For this reason, we believe that both teams will find the net.

Gers to lead at the break

The best odds for Aberdeen vs Rangers

Aberdeen will welcome Rangers to the Pittodrie Stadium on Tuesday, in their first match of the year; they had a good run of form, winning four of their last five games to close out the year. Stephen Glass will hope to upset league leaders Rangers today; he’ll call on Christian Ramirez to lead the attack.

Rangers have been the hottest team in Scotland this season; The Gers have won nine straight league games, and they have no losses in their last 18 Premiership games. Rangers will look to extend their winning streak in the league to 10 games; Alfredo Morelos will be the man to watch.

The final word on Aberdeen vs Rangers 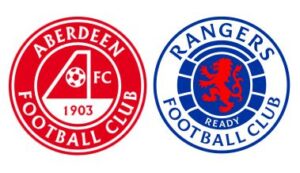