Both teams are located at the bottom of the table and will face each other in search of three points that will allow them to get out of the bottom. Both teams tied the previous day and will try to get back to winning ways, which have eluded them since matchday 1.

The best Picks and Predictions for Tigre vs Talleres de Cordoba

To set the right bet for Tigre vs Talleres de Cordoba, read about our predictions and betting tips for free:

The home team dominates the head-to-head record with 2 wins and 1 draw. Both teams are going through a bad moment in the league, having won just 1 game on the first matchday and since then they have played 4 games in which they have only drawn a few times and lost in others. We deduce that in this duel, Tigre will take advantage of playing in front of their home fans, and will take the 3 points.

The T’s have 10 consecutive games with an under 2.5 goals result, and one of the reasons is that they have scored very few goals during this period. In fact, in this league, they have scored only 3 times. Therefore, it would not be unusual to see only 1 or 2 goals in this matchup.

The away team scored in only 5 of their last 10 games, and only once, in those 5 games, they could score more than 1 goal. Due to Talleres’ lack of attacking power, we think they will not score against Tigre.

Who Will Break The Losing Streak? – Tigre vs Talleres de Cordoba Preview

Diego Martinez’s team has not been able to repeat the good performance it had in the previous tournament, where, in addition to reaching the next phase, it was able to reach the final. One of the difficulties for Tigre has been to maintain the lead when it is ahead on the scoreboard; precisely this happened the previous day against San Lorenzo. On matchday 5, El Ciclon managed to equalize the goal scored by El Matador in the first half.

Last week, La T has had 2 tough weeks, in which it has had to play 3 matches, 1 in the Argentine Cup, where it drew 0-0 with Chacos For Ever, and the other 2 in the league. In none of those two matches they were able to win, in the first one, they lost 0-2 at home against Central Cordoba and on the second one they drew, again in their stadium. In this last match, La T was about to lose again against Colon, but in the 87th minute, Enzo Diaz assisted Alan Franco, who scored to equalize the score.

If you want to bet on the top odds for Tigre vs Talleres de Cordoba, check our selection of odds from the best betting sites: 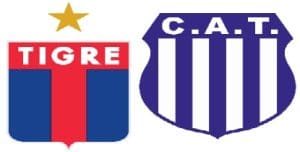 Who is the bookmakers’ favorite to win? The more probable winner is Tigre at 3/4 (1.75) odds