With so many matches being played in the WC Qualifiers on Sunday, some friendly game might not get enough attention. With that in mind, we have prepared a preview of the Sweden vs Uzbekistan friendly match for you.

Our free betting predictions for Sweden vs Uzbekistan

If you can’t find the right bet for Sweden vs Uzbekistan, check our top betting tips for this game:

Sweden to Win at Half Time and Full Time

Even though this is a friendly match and we don’t expect Sweden to be at their best, they still shouldn’t have problems with Uzbekistan. With that in mind, our prediction is for Sweden to lead at half time and win at the end of the game. After all, Sweden is not just the better team, but they are also playing at home.

Since this is a friendly game, we don’t expect the teams to be overly focused on defence. Instead, we expect to see attacking performances from both teams and at least three goals in the game. In addition to this, Sweden has gone over 2.5 total goals in three of their last five matches across the board, while the same is true for three of the last five Uzbekistan games.

If this was a competitive match, we wouldn’t expect to see Uzbekistan scoring. However, it is a friendly game and Uzbekistan scored in three of their last five games, so we can see them putting one goal past Sweden. Of course, Sweden should score multiple times as well, so our prediction is for both teams to score in this game.

While we don’t expect the teams to play at their full strength since this is a friendly match, we still expect to see a good game. So, let’s take a closer look at the teams now:

It’s been a good summer for Sweden since they were playing at the 2020 Euro and they managed to get out of the group. While their fans were probably disappointed by a loss in the Top 16 round against Ukraine, they can be happy with the shape of the team for the future. Sweden proved how good they can be just a few nights ago when they beat Spain in their WC Qualifiers duel to take over the first spot with nine points from the first three rounds. So, things are good in Sweden at the moment.

While Uzbekistan participated in World Cups before as a part of the Soviet Union, they are still waiting on their first-ever appearance as an independent nation. Unfortunately for them, this will not happen in Qatar in 2022 since the team was eliminated already from the Asian WC Qualifiers in the second round after they finished second in their group, but without enough points to qualify as one of the best-ranked second-placed teams.

Top odds and stats for Sweden vs Uzbekistan

You can see the top odds and stats for the Sweden vs Uzbekistan duel on our website, so check them out right here: 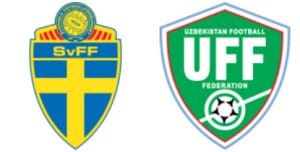