Sturm Graz and Real Sociedad go head-to-head in Europa League Group B on Thursday. Read our predictions and find the latest odds for the fixture below in our detailed match preview.

Can formidable Spanish outfit Real Sociedad claim their first Europa League win of the campaign? Read our top three expert predictions for this week’s fixture below.

In-form Real Sociedad went top of La Liga with their late win against Mallorca at the weekend and with confidence in their camp surging, we’re tipping Los Txuri-Urdin to harness their momentum against Sturm Graz. The Austrians have lost two fixtures out of two in Europa League Group B so far and they could struggle to match their visitor’s class this week.

Many of Real Sociedad’s recent assignments have been decided by slender margins and their mean defence coupled with a less than prolific attack has produced a high number of low-scoring contests. Indeed, under 2.5 goals have been scored in eight of their last ten matches in all competitions and we expect a similarly tight affair when Real visit Austria on Thursday.

Real Sociedad like to adopt a cautious approach in the early exchanges of their fixtures and as a result, they tend to do most of their best-attacking work in the second half. Incredibly, each of their last seven goals – which were spread over their last five matches – were notched after the interval and Sociedad’s slow-starting nature could be worth backing this week with a stake on the half-time draw market.

Sandro Ingolitsch is Sturm Graz’s only major injury concern ahead of Thursday’s game. The Austrians gave a good account of themselves on matchday one in Group B in a narrow 1-0 loss at Monaco, though Graz were thumped 4-1 at home by PSV in a worryingly one-sided game in the second round of fixtures. A third defeat this week would all but condemn them to an early Europa League exit.

Carlos Fernandez, Nacho Monreal, Jon Guridi and Diego Rico are all out for Real Sociedad and that quartet will be joined on the sidelines by key forward Mikel Oyarzabal this week. David Silva and Alexander Sorloth were fit enough to return to the bench at the weekend however, and both players will be pushing to start in Austria on Thursday. 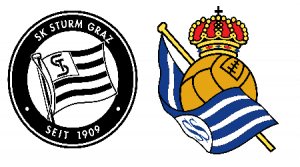 This will be the first ever competitive meeting between Sturm Graz and Real Sociedad.