Hearts remain unbeaten in the Scottish Premiership after 10 games but have drawn their last two. What will happen as they visit St Johnstone on Wednesday evening? Find out with our St Johnstone vs Hearts preview here along with the predictions and free tips we mention along the way.

Hearts to get back to winning ways

We begin our betting predictions with a tip that backs Hearts to beat St Mirren. Hearts have drawn their last two matches but that won’t have dampened their spirits too much – or at all in fact. They remain unbeaten and in second place in the Scottish Premiership standings and have seemingly found a great balance between scoring goals and not giving many away. That combined with the fact that St Johnstone have lost their last two – and three in the last five – means we fancy the away side to leave with three points.

A clean sheet and a win for the away side

We’ve just touched on the fact that Hearts have found a great balance between attack and defence, which has underpinned their impressive start to the season. Well, that is a huge part of our thinking in this prediction as we back Hearts to win to nil. The other factor we’ve looked at is St Johnstone; they have the worst ‘goals for’ in the entire league.

Okay, so our third free betting tip for this match is somewhat of a safety net but let us touch on the thinking. We’ve already explored the fact we think Hearts will win and that Hearts will keep a clean sheet. The reason we’ve included a straight forward both teams to score ‘no’ prediction is to ensure we capture some winnings in the event Hearts don’t find a way through the St Johnstone rear guard and, as a result, fail to win the match. Why do we feel the need for this sort of wager? Well, St Johnstone don’t give up too many goals and Hearts have drawn their last two.

The best odds for St Johnstone vs Hearts

St Johnstone might not be flying in terms of league position but they’ve got a solid base from which to build from; that’s what they’ll be thinking at least. In respect of team selection Shaun Rooney is likely to miss out with a knock whilst late decisions will be made on Ali Crawford and Liam Gordon; both played at least some part at Celtic (Crawford 28 minutes and Gordon the full 90). Will they be ready to go again so soon after coming back from injury?

Hearts, who remain as the only unbeaten side in the league, have no worries on the injury front giving them a full squad to choose from. Given the way they’ve started the season it would be a surprise to see many alterations to the team. Liam Boyce must be the first name on the team sheet though; he only played an hour on Saturday so should be raring to go.

The final word on St Johnstone vs Hearts 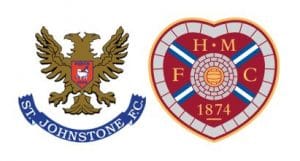