Neither of these teams will be pleased with the manner in which their campaigns have begun. Can either grab a valuable three points here to kick them into gear? Find out with our St Johnstone vs Dundee preview here along with the predictions and free tips we mention along the way.

St Johnstone haven’t had a great time of it of late particularly at home where they’ve won just one of their last 10 games. In their last three games in all competitions though they’ve picked up two wins; one was a good away win at Aberdeen and the other was a League Cup victory over their visitors for this match. Dundee wouldn’t have been shocked by their cup loss though; it’s become somewhat of a habit. They’ve lost four of their seven league games this season drawing the other three. They look doomed already and won’t get a helping hand here either.

Our next prediction for this match is that it will serve up fewer than three goals. A look across the league form since the first game week will give you plenty of insight into our logic. St Johnstone have averaged just 1.1 total goals per game; that’s the lowest in the league. Then there is Dundee; they sit on 2.4 goals per game. If you then focus on recent games St Johnstone are the only side to have a game over 2.5 goals in their last five outings. Even then it’s just the solitary game.

We’ve already talked about just how pathetic both these teams are in respect of total goals but now we switch our attention to Dundee specifically. Their game average of 2.4 isn’t horrendous on the surface but they concede a fair few, which inflates their number. When it comes to the goals they score, we’ll, it’s almost laughable. Dundee have failed to score in any of their last five games – including one match against St Johnstone. They’ll blank again. We’d almost hang out hat on it.

The best odds for St Johnstone vs Dundee

St Johnstone had started the season in rather ropey form but they’ve won two games in their last three, which has helped to ease the miserable mood around McDiarmid Park. Goal scoring is a real problem but so is getting every player available for selection. On the latter, Murray Davidson and James Brown could be back.

Dundee are rooted to the foot of the Premiership table having won none of their seven games to date. Charlie Adam is someone that could help them out massively with his quality and, more importantly, his experience and he could be back in contention for this match.

The final word on St Johnstone vs Dundee 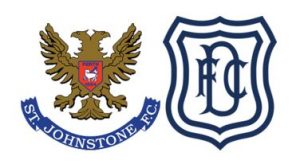