Sparta Rotterdam and Groningen meet on Sunday to battle it out for three points in the Eredivisie. Read our predictions and find the top odds for the fixture below in our expert match preview.

16th meets 15th in the Eredivisie when Sparta Rotterdam and Groningen face off on Sunday. Read our top three expert predictions for this weekend’s fixture below.

Three of Sparta’s first four home games of the 2021/22 campaign in the Netherlands produced goals at both ends, while three of Groningen’s first four tests on the road also delivered winners for BTTS backers. It’s also worth noting that both teams to score landed in each of the last three encounters between the sides and we recommend sticking with that market on Sunday.

Sparta and Groningen hold similar goal-scoring records this season, averaging just 0.875 goals per 90 minutes in the Eredivisie overall. With their shared struggles in the final third well established, and a draw forecast in an earlier tip, a 1-1 final score jumps out at a price worth backing this weekend. Sparta have already tied 1-1 with two of their visitors to Rotterdam this term and a repeat performance looks possible here.

Tom Beugelsdijk is rated as a doubt for Sunday’s game, while Aaron Meijers will sit out the contest due to a suspension. Sparta have endured a miserable campaign so far and they collected just two points from the 12 on offer in the lead up to the international break. De Kasteelheren will kick-off Sunday’s fixture just two places off the bottom of the Eredivisie table.

Mike Te Wierik, Laros Duarte and Radinio Balker are all considered doubts ahead of the weekend for Groningen. Danny Buijs’s men stopped a three-game losing streak with a useful point at home to Twente before club football paused for the international break, though a second victory of the season looks far from imminent for the out-of-sorts Trots van het Noorden.

Top Betting Odds and Stats for Sparta Rotterdam vs Groningen 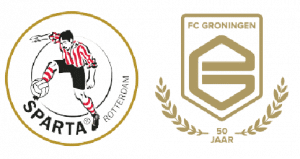 Sunday’s game will be played at the Sparta-Stadion Het Kasteel.

We recommend using the odds at 888sport for Sunday’s clash between Sparta Rotterdam and Groningen.