Sparta Rotterdam and Cambuur lock horns in the Dutch Eredivisie on Sunday. Read our predictions and find the top odds for the fixture below in our expert match preview.

Cambuur continue their search for their first away point in the Eredivisie when they visit Rotterdam to take on Sparta. Read our top three expert predictions for this weekend’s game below.

Cambuur have found their feet in the top flight and their return of three wins from their last four Eredivisie fixtures is a run of genuine promise. The newly-promoted outfit have lost each of their first two games on the road, though fixtures at PSV and Ajax were always bound to be tough, and we’re tipping Henk de Jong’s men to pocket their first away points of the campaign against a Sparta side that has one just once in six attempts this term.

Both teams hit the net in each of Sparta’s three home matches his season and in four of their last five fixtures overall and bettors are advised to expect action at both ends again when Cambuur visit Rotterdam on Sunday. The Leeuwarden-based club have traded blows with their opponents in four out of six Eredivisie assignments since their promotion and we’re tipping that pattern to continue this weekend.

Henk de Jong’s free-wheeling tactical approach turned Cambuur into one of the Netherlands’ most entertaining teams to watch last season and that same attacking blueprint is starting to produce similar levels of action this term. Five of the club’s first six games in the top-flight passed the over 2.5 goals line and the same bet could reap dividends again in Rotterdam on Sunday.

Defender Tom Beugelsdijk is expected to be in the treatment room until next month, though coach Henk Fraser has a strong squad to choose from elsewhere. Sparta have won only one Eredivisie fixture so far this season, which is a worrying trend, especially when you consider that the club was handed a favourable run of early fixtures. De Kasteelheren became the first club to drop points to bottom club Zwolle in midweek when the sides drew 1-1.

Maxim Gullit is expected to be out of action until October, while fellow defender Erik Schouten could also miss Sunday’s game. Cambuur showed great determination to bounce back from their harrowing 9-0 defeat at Ajax last weekend by turning Heracles over in Leeuwarden on Thursday. Their 2-1 victory fired them into the top half of the Eredivisie table.

Top Betting Odds and Stats for Sparta Rotterdam vs Cambuur 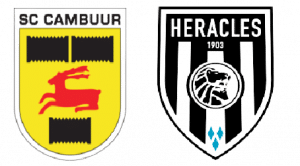 What time does Sunday’s fixture kick off?

Betfred have the best odds for Sunday’s clash between Sparta Rotterdam and Cambuur.

Neither club is expected to be in the running for honours this season. Instead involvement in a relegation battle is likelier for both.