The Sao Paulo vs Sport Recife duel in the upcoming Serie A round could be a very exciting one given the stakes, so check our detailed preview of the game if you want to know more about it.

If you need some help to decide on the right bet for the Sao Paulo vs Sport Recife duel, take a look at our free betting tips right here:

Sao Paulo and Sport Recife to Draw at Half Time

While Sao Paulo is five points away from the relegation zone at the moment, they will likely try very hard to win this match to feel even safer before the final three rounds of the season. We expect them to achieve this, but the odds are too low and we are not sure whether it’s smart to bet on them with a handicap.

Instead, we suggest betting on the two teams to draw at half time. Sport Recife only has theoretical chances to stay up at this point, but they will not give up yet. And the last four matches between these two teams have all been very close, decided by one goal. So, we can see that happening again and the teams being tied at half time.

Four of the last five head-to-head duels between Sao Paulo and Sport Recife have gone under 2.5 total goals and there’s no reason to expect a different outcome here.

Both teams have scored in just one of the previous five h2h duels between Sao Paulo and Sport Recife, so we don’t expect to see that happening in this game either.

In addition to this, both teams have scored in just 41% of all Sao Paulo matches in the league this season, while the same is true for as little as 26% of all Sport Recife matches in Serie A until now.

If you are searching for the top Sao Paulo vs Sport Recife odds, check the list of odds we took from the best UK bookmakers:

This season didn’t go as well for Sao Paulo as the fans probably hoped since the team is dangerously close to the relegation zone right now with four points more than then the first team in it. That being said, Sao Paulo won two of their last five games and they would have to mess things up pretty badly to actually get relegated at the end. Galeano, Luciano, Luan, and Willian are on the team’s injury list.

After barely surviving last season in Serie A, Sport Recife most likely won’t be able to stay up once again since they are currently six points away from the first team that’s not in the relegation zone at the moment and they only have four games left to play. Sport Recife also lost three of their last five matches in the league, so it’s hard to see them go on a winning streak now. Five players are injured right now and out of the match. 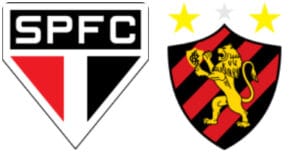