An interesting matchup awaits us in this round of Serie A, the Sao Paulo vs Juventude duel. So, make sure to check our preview of this match to learn more about it and to get some free betting tips along the way.

If you need some help to find the right bet for Sao Paulo vs Juventude, check our favourite betting tips for this game:

Even though Sao Paulo has just one win in the last six games in the league, they enter this game after beating Palmeiras in Copa do Brasil a few days ago. Meanwhile, Juventude is currently last in Serie A standings.

With that in mind, it’s pretty clear why Sao Paulo is the favourite in this game and why we expect them to get the three points from it. On top of that, Sao Paulo beat Juventude in three of their previous five duels, while the other two ended in draws.

While we only saw three or more goals in two of the last five h2h meetings between Sao Paulo and Juventude, we expect to see that in their upcoming match.

Both teams have scored in three of the last four head-to-head duels between Sao Paulo and Juventude, so we expect the same thing to happen on Sunday as well.

After all, both teams have scored in a whopping 77% of all Sao Paulo matches in Serie A so far, while the same is true for 69% of all Juventude games in the league this season.

Sao Paulo vs Juventude preview: An easy job for the home team?

Even though they lost to Palmeiras in the last round despite leading until the stoppage time, Sao Paulo enters this game in good mood since they managed to beat Palmeiras in Copa do Brasil over the week. Overall, Sao Paulo is having a good season since they have reached the Top 16 stage of Copa Sudamericana and they are eighth in Serie A standings at the moment, although they only have one win in the last six games in the league.

With ten points from the first thirteen games in the new Serie A season, Juventude is not in a great situation and they are sitting in the relegation zone at the moment, five points behind the first team outside of the relegation zone. And while it’s still early in the season for panic, Juventude needs to get on a good run soon or they risk falling behind too much.

The latest odds, stats, and more for Sao Paulo vs Juventude

If you want to place a bet on the best odds for Sao Paulo vs Juventude. take a look at our list of odds from the top UK betting sites: 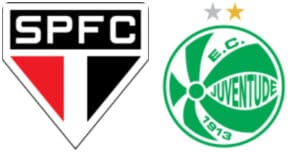