Another interesting duel scheduled for the weekend in the upcoming round of Serie A is the Sao Paulo vs America Mineiro matchup. So, check our preview of this game to learn more about it and to get some free betting tips as well.

If you are not sure what is the best bet for Sao Paulo vs America Mineiro, check our top betting predictions for this duel:

While Sao Paulo managed to beat America Mineiro just once in their last five meetings, we expect that to happen now since the home team is in better form and they will have the support of their fans.

That being said, the two teams are only separated by one point in the standings since Sao Paulo drew in five of their last six games and while they are one of just three teams that have lost only once this season, this string of draws hurt their point tally a bit.

Four of the previous five head-to-head duels between Sao Paulo and America Mineiro have gone under 2.5 total goals and we can see that being the case in this game as well.

However, Sao Paulo did average 2.80 goals per game in the league until now, which is a pretty high average for Brazilian league. On the other hand, America Mineiro averaged 2.30 goals per game, so under 2.5 still sounds like a smart bet.

Our last prediction is a bit out there since betting on a correct score is rarely wise, but we feel that it’s worth taking a punt at it every once in a while since the odds are simply too good.

We chose 2-0 for this game since we expect the game to go under 2.5 total goals and we expect Sao Paulo to win it, so our choice was limited to 1-0 or 2-0. We selected the latter because we can see Sao Paulo scoring twice in this game.

After the first ten rounds of the new Serie A season, Sao Paulo has fifteen points and they are sitting in the fifth place in the standings. The team only has one loss so far, but they struggled to win as well recently with five draws in the last six games. But overall, things are going well for Sao Paulo, including the fact that only Colorado and Gabriel Sara are injured at the moment.

With two wins, two draws, and two losses in the last six games in the league, America Mineiro has been a bit inconsistent lately. But the team has done well overall since they have fourteen points right now, which is only five points behind the league leaders Palmeiras. Meanwhile, Eduardo, Boia, and Berrio are out of the upcoming game through injuries.

If you want to bet on the top odds for the Sao Paulo vs America Mineiro duel, check our list of odds from various UK bookies: 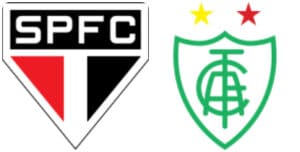