One of the closest duels in this round of Brazilian league is the matchup between Santos and Botafogo. With that in mind, we have prepared a detailed preview of the game for you, along with free predictions.

Our best Santos vs Botafogo betting predictions and picks

If you can’t seem to choose the right bet for Santos vs Botafogo, check our top betting tips for this duel:

Santos and Botafogo to Draw

The two teams enter this game in pretty similar forms and with almost the same point tally in the season so far, with Santos being ahead by just one point. All in all, both teams are near the middle of the standings right now.

With that in mind, we can see this being a close and exciting match. And while Santos has the home-court advantage, we can see this match ending without a winner at this point of the season.

Santos and Botafogo to Draw at Half Time

Since we can see this match ending in a draw, we also expect Santos and Botafogo to be tied at half time, as is often the situation with matches that end without a winner.

In addition to this, three of the last five h2h meetings between Santos and Botafogo were also tied at half time, so we wouldn’t be surprised if that’s the case again in this game.

Three of the previous five head-to-head duels between Santos and Botafogo have gone under 2.5 total goals, so we expect that trend to continue in their upcoming match.

Santos vs Botafogo preview: A very close and exciting duel

With two wins, two draws, and two losses in the last six matches in the league, Santos has been pretty inconsistent lately. Overall, they are sitting right in the middle of the standings, four points ahead of the relegation zone and four points behind spots that lead to Copa Libertadores next season. Lucas Pires, Maicon, and Sandry are out of the next game through injuries.

The newly-promoted team has three wins and three losses in the last six games and they are thirteenth in the standings at the moment, one point behind their upcoming opponent Santos. Meanwhile, the team has five players on their injury list at the moment, which could affect their performance in this game.

The top odds, stats, and more for Santos vs Botafogo

Before you decide what bet to place on the Santos vs Botafogo duel, check the best odds and stats for the match right here:

The usual questions for Santos vs Botafogo 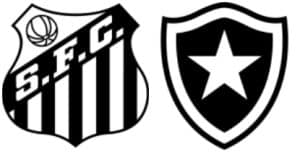