Probably one of the more exciting second legs in the Top 16 stage of Copa Libertadores is River Plate vs Velez, so check our preview of this game to learn more about it and to get some free betting tips along the way.

Our top River Plate vs Velez betting predictions and picks

If you are struggling to find the best bet for the River Plate vs Velez duel, take a look our top betting tips for this match here:

After winning the first leg 1-0, Velez has a very good chance of surprising River Plate and reaching the quarter-finals of Copa Libertadores. Of course, they first have to do as well in the second leg, which we don’t see happening.

In fact, we can see the reigning champions of Argentina winning this game by two or more goals, which will be enough to turn around the deficit and get to the next stage. The reason is simple – River Plate is the much better team on paper and they are hosting this game.

Since we expect River Plate to win this game by two or more goals, we can also see them leading at half time and holding on to that lead until the end of the game.

That being said, River Plate failed to do this in the last five h2h duels against Velez, so they clearly struggle against this team. But that barrier has to be broken sometimes and this match seems like the perfect opportunity to do so.

Even though we’ve seen three or more goals in just two of the last five h2h meetings between River Plate and Velez, we expect this match to go over 2.5 total goals.

River Plate vs Velez preview: Can Velez defend the advantage from the first leg?

After failing to get out of the quarter-finals in Copa de la Liga Profesional, River Plate didn’t have the best of starts in Liga Profesional either, managing to collect just eight points from the first six rounds. So, they certainly have a long way to go if they want to defend their title. On top of that, River Plate lost to Velez 1-0 in the first leg of Copa Libertadores Round of 16, so we are not sure how confident they are about getting to the next stage.

The first part of the season in Argentinian league, Copa de la Liga Profesional, didn’t end well for Velez since they failed to reach the playoffs. Meanwhile, the team had a very poor start in Liga Profesional as well, with five points from six matches. On the bright side, Velez has the minimal advantage ahead of the second leg against River Plate and a nice chance to get to the Copa Libertadores quarter-finals.

The latest odds and useful stats for River Plate vs Velez

If you are trying to find the best River Plate vs Velez odds, check our list of odds from the main UK betting websites:

The most frequent questions for River Plate vs Velez 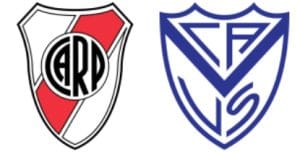