Perhaps one of the closest matchups in the upcoming round of Copa de la Liga Profesional is the Platense vs Sarmiento duel, so check our preview of this game and our top betting tips:

If you can’t find the right bet for the Platense vs Sarmiento duel, take a look at our free betting tips for this game:

Platense and Sarmiento to Draw

With both teams off to a surprisingly good starts of the new Copa de la Liga Profesional season, we can see this game being a very exciting and close one.

In fact, we can see this match ending in a draw since both teams are in good form and they are similar in quality. Of course, Platense has the home-court advantage but Sarmiento has been the more successful team recently in their h2h duels with two wins in the last three games.

Platense and Sarmiento to Draw at Half Time

Since we expect this game to end in a draw, we also expect the teams to be tied at half time. After all, that’s the usual way that the games which end without a winner go.

Furthermore, the last three h2h meetings between Platense and Sarmiento have been tied at half times, so we wouldn’t be surprised if that’s the case on Saturday too.

Both teams have scored in two of the last three head-to-head duels between Platense and Sarmiento, so we can see that happening again in their next game.

When it comes to this season, both teams have scored in one of the two matches played by both teams in the first couple of rounds of Copa de la Liga Profesional.

Platense vs Sarmiento preview: Both teams in good form

The team from Buenos Aires was 19th in the aggregate standings last season, but they started the new season in Copa de La Liga Profesional much better – with a win and a draw. That puts them among the teams that share the top spot in their group and if Platense can keep the form going, we might see them in the playoffs this year. Barbas, Mansilla, and Delgadillo are all out with injuries at the moment.

Just like Platense, Sarmiento also started the new season with four points from the first two rounds of Copa de la Liga Profesional. This was a surprise to many since Sarmiento was 25th in the aggregate standings last season out of 26 teams in the league. Another positive for the team is their clean bill of health right now.

The best odds and key figures for Platense vs Sarmiento

If you are looking for the highest Platense vs Sarmiento odds, check them out right here, on our site:

Frequent questions for Platense vs Sarmiento 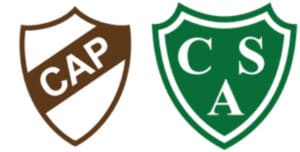