Perhaps one of the most exciting matchups in the second round of Copa Libertadores is the Penarol vs Olimpia duel. With that in mind, we have prepared a detailed preview of this game just for you, along with some free betting tips.

Our favourite Penarol vs Olimpia betting tips and predictions

If you are not sure what is the best bet for Penarol vs Olimpia, check our top betting tips for this game right here:

Penarol and Olimpia to Draw

While Penarol lost to Colon away from home in the first round, Olimpia drew with Cerro Porteno at home. Meanwhile, Penarol is without a loss in the last six games in the Uruguayan Apertura, but Olimpia is also doing well in their domestic championship.

That being said, Olimpia did lose three of their last five games in all competitions and we can see this being a very close game. With that in mind, we feel that a draw is the most realistic outcome.

Penarol and Olimpia to Draw at Half Time

Since we can see this game ending without a winner, we can also see the two teams being tied at half time. After all, a draw is the most common result at half time for matches that end in a draw.

In addition to this, Penarol drew at half time in three of their last five games in all competitions and the same is also true for Olimpia in the last five matches across the board.

We’ve seen three goals in the duel between Penarol and Colon, while Olimpia’s match in the first round ended without any goals. We don’t expect to see many goals here.

Despite their loss to Colon in the first round of Copa Libertadores, the team from Montevideo is actually in very good form. Penarol is without a loss in the last six games in the Uruguayan Apertura, during which time they’ve recorded three wins and three draws. So, their fans are rightfully hoping for a good result in the next game.

Just like their upcoming opponent, Olimpia also lost their first-round game in Group G of Copa Libertadores, so this is a very important match for the Paraguayan team. Meanwhile, Olimpia is on a bad run of form in their domestic championship as well, where they lost three of their last four games. Still, they are fourth in the standings thanks to good results at the start of the season.

The best odds and important figures for Penarol vs Olimpia

If you don’t want to spend time looking for the highest Penarol vs Olimpia odds, check them all out right here on our website:

The most common questions for Penarol vs Olimpia 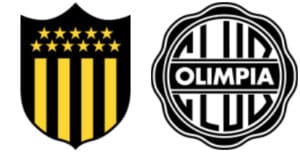