One of the more interesting matches in the upcoming round of Copa Libertadores is the Palmeiras vs Emelec duel, so check our detailed preview of the game to learn more about it.

Our free Palmeiras vs Emelec betting picks and tips

If you can’t seem to decide what is the best bet for Palmeiras vs Emelec, check our top betting predictions for this duel:

The reigning champions of South America have dominated their group so far and they are now sitting at the top with all four wins. So, they already secured their place in the next stage, while Emelec will try to do the same in the next two rounds since they are currently second.

That being said, we don’t see the guests avoiding a loss here. Palmeiras won’t be doing them any favours and we expect them to win this game by two or more goals, just because they can.

The first duel between Palmeiras and Emelec ended with four goals being scored and we expect their second game in the group to go over 2.5 total goals as well.

The first game in the group between Fortaleza and River Plate ended with Fortaleza failing to score and we don’t see both teams scoring in this match either.

Of course, the more likely team to fail to score is Fortaleza, so you can also try River Plate to keep a clean sheet or River Plate to win to nil, but we decided to suggest the safest bet here.

Palmeiras vs Emelec preview: Can the guests put up a fight in this game?

The two-time reigning champions of South America already secured the top place in the group after they won all four of their games so far, with a goal difference of +18! So, it’s clear that Palmeiras is gunning the elusive third win in a row, which only happened twice in the history of the competitions. On the other hand, Palmeiras had a poor start in Serie A, with nine points from six games.

With three wins and two draws in the last six games in the Ecuadorian league, Emelec is doing well at the moment, but they are still only in the fifth place in the standings. Meanwhile, the team is second in their Copa Libertadores group but they only have one point more than Deportivo Tachira, so we can expect this to be a close race for the next stage.

The top odds and helpful stats for Palmeiras vs Emelec

If you wish to bet on the highest Palmeiras vs Emelec odds, check our list of odds taken from the best UK betting sites: 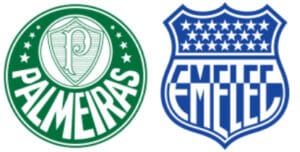