The second round of Primera A Apertura comes only a few days after the first round and it brings us a few interesting matchups, like the La Equidad vs Once Caldas duel. So, here’s our preview of the game and some free betting tips.

Our top La Equidad vs Once Caldas betting tips and predictions

If you can’t seem to decide on the right bet for the La Equidad vs Once Caldas duel, check our top betting picks for this match:

Once Caldas did not impress last season, and they failed to impress in the first round of the new season as well since they did not manage to get a win against the newly-promoted Union Magdalena.

However, La Equidad also drew in the first round against Independiente Santa Fe. Still, La Equidad is the better team on paper and they will play at home, so our prediction is for La Equidad to win the game.

Four of the previous five head-to-head duels between Once Caldas and La Equidad have gone under 2.5 total goals and there’s no reason to expect a different outcome in this match.

After all, La Equidad averaged just 2.05 goals per game last season in Torneo Finalizacion (Clausura), while Once Caldas averaged 2.40 goals per game in that same competition.

Both teams scored in just two of the previous five meetings between La Equidad and Once Caldas and we don’t see them both scoring in this game either.

That being said, both teams scored in matches played by both La Equidad and Once Caldas in the first round of Apertura, but we have a feeling that this won’t happen again on Wednesday.

La Equidad vs Once Caldas preview: Will either team get their first win of the season?

The team from Bogota finished last season in the seventh place in the aggregate standings and they also secured a place in Copa Sudamericana thanks to good results – mostly their performances in Torneo Apertura, where they  reached the semi-finals in the playoffs. In Torneo Finalizacion, La Equidad only finished it in the 15th spot in the standings. The team started the new season with a draw against Santa Fe.

The Manizales-based team failed to reach the playoffs in both tournaments in Primera A last season, finishing Torneo Apertura in 15th and Torneo Finalizacion in 17th spot in the standings. So, the team will obviously hoping for a better season now and a better aggregate finish than the 17th place. Once Caldas started the new season with a draw against Union Magdalena.

The latest odds and stats for La Equidad vs Once Caldas

You don’t have to spend a lot of time looking for the best La Equidad vs Once Caldas odds – you can find them right here:

The most common questions for La Equidad vs Once Caldas 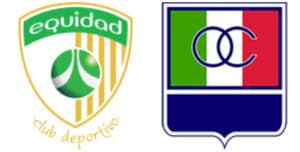