The first match to be played in Round 12 of the Brazilian Serie A is the Juventude vs Santos duel. With that in mind, we have prepared a detailed preview of this game for you, along with some free betting tips.

Our best Juventude vs Santos betting predictions and picks

If you are struggling to find the right bet for the Juventude vs Santos duel, check our top betting tips for this game:

Juventude and Santos to Draw

Although Santos is without a win in the last six games in the league, four of those matches were draws. And despite this dip in form, Santos is still four points ahead of Juventude, who is in the relegation zone.

That being said, Santos failed to beat Juventude last season, losing once and the other game ending in a draw. That is exactly what we expect from this game as well, given the recent forms of the teams and the fact that Juventude is hosting the game.

Juventude and Santos to Draw at Half Time

Since we expect this game to end in a draw, we can also see the two teams being tied at half time. After all, that is the most frequent outcome at half times of matches ending in draws.

In addition to this, Juventude drew at half time in seven of their eleven games so far this season, while the same thing happened in six of eleven Santos matches in Serie A.

While we didn’t see both teams score in the two games that Juventude and Santos played against each other last season, we can see that being the case now.

After all, both teams have scored in 64% of all Juventude matches in Serie A until now, while the same is true for 55% of all Santos games in the league this season.

Juventude vs Santos preview: Can the guests break the poor run?

With ten points from the first eleven games in the new Serie A season, Juventude is currently sitting in the relegation zone. That being said, they are only a few points behind teams in the middle of the table, so it’s certainly way to early for them to panic. In addition to this, the team has no injury issues to worry about at the moment.

After the first eleven rounds of Serie A, Santos is slightly above the middle of the standings with fourteen points. However, the team is without a win in the last sis matches in the league, with four draws and two losses. When it comes to their health, Gabriel, Leonardo, and Melo are all injured at the moment and will miss the upcoming game.

The best odds and key figures for Juventude vs Santos

If you want to place a bet on the top Juventude vs Santos odds, check our selection of odds from the main UK bookmakers: 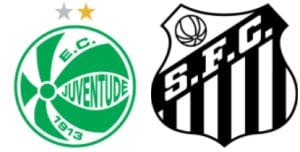