The Juventude vs Goias duel in the upcoming round of Serie A should be an interesting and close one, so check our preview of the match if you want to know more about it and you want to get some free betting predictions along the way.

Our latest Juventude vs Goias betting tips and picks

If you are not sure what is the best bet for Juventude vs Goias, check our top betting tips for this game right here:

Juventude and Goias to Draw

It’s been a rough season for the home team so far since they are in the relegation zone at the moment and without a win in the last seven games. Meanwhile, Goias is in the middle of the standings and they’ve won two of their last three matches in the league.

So, the guests are obviously in better form, but Juventude is hosting the game. With that in mind, we feel that a draw in this match is the most realistic outcome.

Juventude and Goias to Draw at Half Time

Since we expect this game to end in a draw, we can also see Juventude and Goias being tied at half time, as is usually the case for matches that end without a winner.

In addition to this, these two teams drew at half time in two of their last four h2h meetings, so we won’t be surprised if that’s the case once again on Sunday.

Both teams have scored in the last two head-to-head duels between Juventude and Goias, so we expect the same to happen in their upcoming match as well.

Furthermore, both teams scored in 69% of all Juventude games in Serie A this season, while the same is true for 56% of all Goias matches in the league until now.

Juventude vs Goias preview: An important game for both teams

It’s been a rough ride for Juventude this season in Serie A since the teams is currently only ahead of Fortaleza in the standings. They are also already six points behind the first team outside of the relegation zone and they lost five of the last seven games in the league. Of course, there is still plenty of time for them to turn things around, but their fans are certainly getting worried already. Miranda, Mendes, and Adriano are out of the next game with injuries.

The newly-promoted team is currently sitting in the 12th place, which seems relatively safe. However, they are also just two points ahead of the first team in the relegation zone, so there’s no room for complacency at this stage of the season. Goias won two of their last three games in the league, which is a good sign for things moving forward, but they also have five players on their injury list at the moment.

The top odds and key figures for Juventude vs Goias

If you are looking for the best Juventude vs Goias odds, check our selection of odds from the top UK bookmakers:

The usual questions for Juventude vs Goias 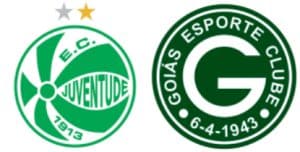