The first match in the upcoming round of Serie A is the Internacional vs Coritiba duel. With that in mind, we have prepared a detailed preview of the game for you, along with some free betting tips.

Our favourite betting predictions for Internacional vs Coritiba

If you aren’t sure what is the right bet for the Internacional vs Coritiba duel, check our top betting tips for this match:

Although Internacional enters this game after a shocking loss to Botafogo in a game in which they led 2-0 with Botafogo being one man down, we are still backing them up in this match as well.

After all, Internacional has done very well so far in the league and they are currently fourth in the standings, while Coritiba is on a three-game losing streak and one point above the relegation zone. So, we expect Internacional to win this game.

We have seen three or more goals in just one of the last five h2h meetings between Internacional and Coritiba, but it was their last duel and we can see that happening in this game too.

Both teams have scored in just two of the last five head-to-head duels between Internacional and Coritiba, but we can see that happening in their upcoming duel on Saturday.

After all, both teams scored in 69% of all Internacional matches in the league until now, while the same thing happened in 54% of all Coritiba games in Serie A this season.

Internacional vs Coritiba preview: Can the guests put up a fight?

After the first thirteen rounds in the new Serie A season, Internacional is sitting in the fourth place in the standings with 21 points. At the moment, they are seven points behind Palmeiras, the league leaders right now, so things are going well for them so far in the league. However, in the next game, Internacional will be without David, Mercado, and Moises who are suspended, as well as a few injured players.

The newly-promoted team had a pretty good start of the season in Serie A, but they’ve fallen behind lately with three straight losses and one win in the last six matches in Serie A. In addition to this, Coritiba is also struggling with squad issues, with three players suspended ahead of the next match and four players on the team’s injury list at the moment.

The best odds and important stats for Internacional vs Coritiba

If you want to place a bet on the highest odds for Internacional vs Coritiba, check our selection of odds from the main UK bookies:

The most common questions for Internacional vs Coritiba 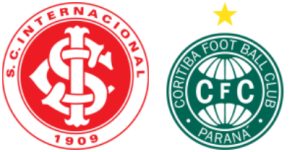