One of the most interesting second legs in the Copa Sudamericana qualifiers is the Guairena vs Nacional duel. We have done a preview of this match for you and you can also check some of our free betting predictions.

Our favourite Guairena vs Nacional betting picks and tips

If you need assistance to find the best bet for the Guairena vs Nacional duel, take a look at our top predictions and tips for this game:

Both Guairena and Nacional are struggling at the start of the new season in the Paraguayan Apertura since Guairena is without a win in the first six games, while Nacional has five points.

However, Guairena won the first leg between these two teams and now they have an advantage of one goal for the second leg. However, we can see Guairena winning the second leg as well, especially since they’ve already beaten Nacional in four of their last five h2h duels.

Guairena and Nacional to Draw at Half Time

The game between Guairena and Nacional might very well end up in a win for the hosts, as we expect. However, we also think that it’s going to be a close game.

With that in mind, we can see the match being decided in the second half and the teams being tied at half time. After all, three of the previous five h2h meetings between Guairena and Nacional have been draws at half times.

Four of the previous five head-to-head meetings between Guairena and Nacional have gone under 2.5 total goals and we can see that being the case once again in their next game.

After all, Guairena averaged just 1.83 goals per game so far in their domestic league, while Nacional averaged 3.07 goals per game in the Paraguayan Apertura this season.

Guairena vs Nacional preview: Can Nacional overcome the deficit?

The team from Asuncion is not doing well at all at the start of the new Apertura in Paraguay since they have three draws and three losses after the first six rounds. This puts Guairena in the 11th spot in the standings in a league with 12 teams and that’s worrying. On the bright side, the team is entering the second leg of Copa Sudamericana qualifiers against Nacional with an advantage of one goal.

The top odds and important stats for Guairena vs Nacional

Don’t waste time looking for the highest Guairena vs Nacional odds – just check them all out right here: 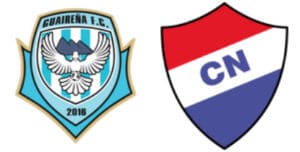