The home team lost the last matchday, which meant the end of their unbeaten run and the possibility of being top of the league. The visitors are motivated after ending a 3-match losing streak and being eliminated from the Copa Libertadores.

To set the right bet for Gimnasia La Plata vs Colon, read about our predictions and betting tips for free:

In the last 3 years, they have met 4 times, with 2 wins for each side. Their last meeting ended 1-0 in favour of Colon, which played at home. That match was a bit dirty there were 3 red cards.

In that period, Colon could not beat Gimansia playing at the Juan Carmelo Zerillo stadium. We think that this will be a very even match, in which the home advantage will influence, so we predict a Gimnasia victory.

The home team has conceded just one goal at home, and despite being in second place, they are not known for scoring many goals in every game. 2 of their 3 home games have ended with an under 2.5 goal scoreline.

El Sabalero has conceded goals in 5 of their 7 games in the tournament, and in 3 away games they have only scored 1 goal. On the other hand, Lobo has conceded just one goal at home, so we expect only one team to score.

Nestor Gorosito’s side was aware of Newells’ draw, which gave Lobo the chance to knock La Lepra out of first place with a win. However, on their trip to Tucuman, they came up against a fierce team, which attacked from the first minute.

El Decano struck from the first minute on and scored, taking advantage of a passive defence by gimnasia. During the rest of the match, the same defensive lapses were repeated, and Lobo suffered another goal from the rival. In this way, Gimnasia lost their unbeaten run in the tournament.

El Sabalero played one of the most exciting matches of matchday 7, this time hosting Velez Sarsfield at their stadium. From the start, El Fortin opened the scoring in the 16th minute, but Colon reacted quickly and equalised in the 29th minute.

In the second half, Colon took the lead straight out of the dressing room, the rest of the second half was even more exciting and there were clear goal-scoring opportunities for both teams, but with little accuracy. The Golie Ignasio Chicco was Sabalero’s hero, saving a penalty in the final minutes.

If you want to bet on the top odds for Gimnasia La Plata vs Colon, check our selection of odds from the best betting sites: 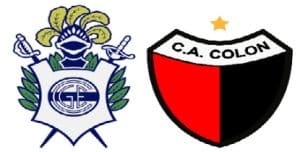 Who is the bookmakers’ favourite to win? The more probable winner is Gimnasia La Plata at 20/21 (1.95) odds