One of the more interesting matchups in the next round of Serie A is the Flamengo vs Coritiba duel. So, make sure to check our preview of the game to get some free betting tips for this match.

Our favourite betting picks and predictions for Flamengo vs Coritiba

If you can’t seem to decide on the right bet for Flamengo vs Coritiba, check our top betting tips for this duel:

Although Flamengo has been far from their best in Serie A so far, which is why thy are just two points ahead of Coritiba, they have been made clear favourites to win this game.

After all, they are a much better team on paper and they are hosting the game, so we certainly expect them to win. In fact, we can see them winning by two or more goals, which happened in two of the last four duels against Coritiba.

Since we expect Flamengo to win the game by at least two goals, we also expect them to do it after leading at half time. After all, this is logical for all matches that end in convincing wins for one team.

In addition to this, Flamengo led at half time and ultimately won the game in the last four h2h meetings with Coritiba, so we don’t see why this game should be any different.

Although we saw three or more goals in just one of the last five head-to-head duels between Flamengo and Coritiba, we can see that being the case in this match.

After some recent struggles, it looks like Flamengo has found their form since they have three wins in the last five games in Serie A, but they also lost in the last round to Corinthians and they are still nine points behind Palmeiras, who is in the first place in the standings. On the bright side, only Bruno Henrique is injured at the club right now.

The latest odds and key stats for Flamengo vs Coritiba

If you want to bet on the best Flamengo vs Coritiba odds, check our list of odds taken from the top UK betting sites:

The most frequent questions for Flamengo vs Coritiba 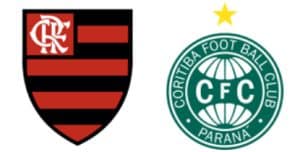