Only a few days after losing the Copa Libertadores final, Flamengo has to get back to their domestic responsibilities. So, check our preview of the Flamengo vs Ceara duel right here.

Our free betting predictions for Flamengo vs Ceara

If you need a bit of help to find the right bet for Flamengo vs Ceara, check our top betting tips for this duel:

Flamengo and Ceara to Draw at Half Time

As we already mentioned, Flamengo enters this game after a loss in Copa Libertadores final to Palmeiras, so it’s hard to see them leaving that behind completely. Also, they only have a theoretical chance to defend their title in Serie A since Atletico only needs one more point to clinch it.

So, it’s hard to see Flamengo on top of their game. Meanwhile, Ceara is in great form and with odds on Flamengo so low, we would avoid betting on final score. Instead, you can try betting on a draw at half time since we expect a close match.

Only two of the previous five meetings between Flamengo and Ceara have gone over 2.5 total goals, but we expect that to happen in this match.

Both teams have scored in two of the last five h2h duels between Flamengo and Ceara, which doesn’t sound that great and it could certainly be better. Still, we expect both teams to score in this game since both teams are in good forms in the league.

In addition to this, both teams have scored in 47% of all Juventude matches in the league so far, while the same is true for 54% of all RB Bragantino games in Serie A this season.

The latest stats and odds for Flamengo vs Ceara

If you don’t want to spend a lot of time looking for the top Flamengo vs Ceara odds, check the best odds for this match right here:

Flamengo vs Ceara preview: Can Ceara end the title race in Serie A?

After losing to Palmeiras in the Copa Libertadores final, in overtime, Flamengo players will certainly need some time to recover. But the time is not the luxury that they have since they still have to finish the season in Serie A and they still have a chance to defend their title, at least theoretically. For that to happen, Flamengo has to win their last four games and Atletico Mineiro has to lose all three of their matches, so it’s hard to expect that to happen. On the bright side, Flamengo has a clean bill of health at the moment.

The team from Fortaleza had a very good season since they are currently eighth in the league and they can climb up a few spots more if they can do well in their last three matches of the season. Ceara is in very good form right now, with four wins, one draw, and one loss in the last six games in Serie A. Bulu, Jacare, and Lopes are injured and out of the next game. 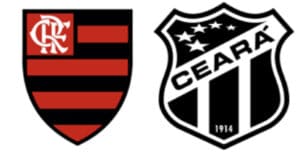