The Estudiantes vs Arsenal duel is one of the closest ones in the fourth round of Copa de la Liga Profesional. With that in mind, we have prepared some free betting tips and a preview of this game for you.

Our latest Estudiantes vs Arsenal betting tips and predictions

If you are struggling to decide on the best Estudiantes vs Arsenal bet, check our top betting tips for this duel:

The only team that managed to win all three games in the first three round of the new Copa de la Liga Profesional is Estudiantes. Meanwhile, Arsenal has four points from their three games so far.

With that in mind, we have little doubt that Estudiantes will win this game. After all, they beat Arsenal in four of their last five head-to-head duels and we don’t see why they can’t do it again.

Estudiantes to Lead at Half Time

Of course, you may also try to bet on Estudiantes to lead at half time and win at the end if you want to take a punt at better odds, since we also expect that to happen in this game.

The last four h2h meetings between Estudiantes and Arsenal have all gone over 2.5 total goals and we can see that happening once again on Sunday.

Furthermore, Estudiantes has gone over 2.5 total goals in all three of their games so far, averaging 3.67 goals in the process. And while Arsenal only averaged 2.00 goals per game, we can see this match being a high-scoring one.

Estudiantes vs Arsenal preview: Can Arsenal surprise us all?

After they were sixth in the aggregate standings last season, Estudiantes has high ambitions for this one. The team started their season in Copa de la Liga Profesional accordingly, with three wins in the first three rounds and they are the only team to do so. Estudiantes has no injuries right now as well.

After the poor last season which they ended as the last team in the aggregate standings, Arsenal is hoping to do much better this season. At the very least, the team seems to be doing well towards that with four points from the first three rounds. In addition to this, Arsenal doesn’t have any injured players except for William Machado.

The latest odds and important stats for Estudiantes vs Arsenal

You don’t have to spend a lot of time looking for the best Estudiantes vs Arsenal odds – you can find them all here, on our site:

Frequent questions for Estudiantes vs Arsenal 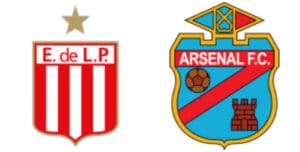