Another interesting matchup scheduled for the upcoming Serie A round is the Cuiaba vs Atletico Mineiro duel. So, let’s take a closer look at this game and what we expect to happen.

Our free betting predictions and picks for Cuiaba vs Atletico Mineiro

If you are struggling to find the best bet for Cuiaba vs Atletico Mineiro, check our top betting tips for this game:

The reigning champions of Brazil have been in good form lately with four wins in the last six games, while Cuiaba won two of their last three games, which helped keep them out of the relegation zone.

So, this can turn out to be a closer game than it seems on the surface, but we still expect Atletico Mineiro to win, which already happened in both of the two duels between these teams last season.

These two teams have only met twice in recent years and one of those two games has gone over 2.5 total goals, the other has gone under, with the average of 2.00 per game.

This season, Atletico Mineiro is averaging 2.47 goals per game, but Cuiaba averaged just 1.82 goals per game so far, which is the lowest average in the league. So, we can see this game going under 2.5 total goals.

Just like our last prediction, the recent h2h score doesn’t help us much since both teams scored in one of the previous two duels between these teams, while that didn’t happen in the other.

The one in which we didn’t see both teams score was hosted by Cuiaba, just like this game, so we can see that being the case on Thursday. Also, both teams scored in just 41% of all Cuiaba matches in Serie A this season, while the same is true for 53% of all Atletico Mineiro games.

Cuiaba vs Atletico Mineiro preview: Can Cuiaba surprise the champions?

In the last six matches in Serie A, Cuiaba has two wins, three losses, and one draw. However, the team also won two of their last three games, which could be a good sign for their form in the future. Overall, Cuiaba is barely hanging above the relegation zone, with just one point more than the first team in it. On the bright side, the team is completely healthy at the moment.

The defending champions of Brazil are in good form at the moment since they have four wins and two draws in the last six games in the league. So, Atletico Mineiro is now second in the standings, only behind Palmeiras who is ahead by just two points. In addition to this, the team is currently without any injuries and suspensions.

The best odds and helpful stats for Cuiaba vs Atletico Mineiro

If you want to place a bet on the top Cuiaba vs Atletico Mineiro odds, check our list of odds from a few different bookies:

The most frequent questions for Cuiaba vs Atletico Mineiro 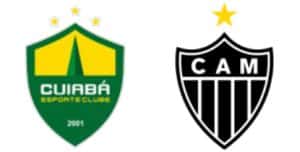