The final game of Round 10 in Serie A is the Coritiba vs Sao Paulo duel, so check our preview of this match if you want to know more about it and you are looking for some free betting tips as well.

Our best Coritiba vs Sao Paulo betting tips and predictions

If you are not sure what is the best bet for the Coritiba vs Sao Paulo duel, check our top betting tips for this game right here:

Coritiba and Sao Paulo to Draw

The two teams come into this game in good mood since they are tied for the fourth place in the standings with fourteen points from nine games. That’s pretty good result for Sao Paulo and an amazing one for Coritiba since they’ve just gotten back to the top flight of Brazilian football.

Taking all this into account, we feel that a draw is the most realistic outcome for this game. After all, three of the last five h2h duels between Coritiba and Sao Paulo have ended in draws.

Coritiba and Sao Paulo to Draw at Half Time

Since our first prediction for this game was for Coritiba and Sao Paulo to draw at the end of the game, we can also see them being tied at half time, as is often the case.

In addition to this, Coritiba and Sao Paulo drew at half time in three of their last five h2h meetings. So, another half-time draw between them would hardly be surprising.

Both teams have scored in the last four head-to-head duels between Coritiba and Sao Paulo, so we expect to see the same thing when they meet on Friday once again.

Furthermore, both teams have scored in a whopping 89% of all Sao Paulo matches this season in Serie A, while the same is true for 56% of all Coritiba games in the league until now.

Even though they just got back to Serie A after spending one season in Serie B, Coritiba had a very good start of the season and they are currently sitting in the sixth place in the standings with fourteen points from the first nine games in the league. Another positive for the team is the fact that they are almost fully healthy, with Andrey being the only inured player at the club right now.

Just like their upcoming opponent, Sao Paulo also started the new season with fourteen points from the first nine rounds, which is only four points behind Corinthians, the team in the first place of Serie A standings right now. Meanwhile, Colorado and Gabriel Sara are on the team’s injury list and they will likely miss the next game.

The best odds and key figures for Coritiba vs Sao Paulo

If you are trying to place a bet on the top Coritiba vs Sao Paulo odds, check them all out right here, on our website:

The most common questions for Coritiba vs Sao Paulo 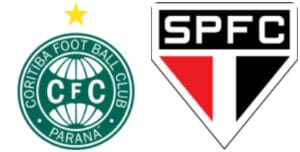