Even though it may not seem that way on the first glance, one of the closest matchups in the upcoming round of Serie A is the Coritiba vs Palmeiras duel. So, here’s a closer look at the game and what we can expect from it.

Our free Coritiba vs Palmeiras betting picks and predictions

If you are struggling to find the best bet for Coritiba vs Palmeiras, check our top betting tips for this match right here:

While Coritiba has been great so far in their first season back in Serie A and while they are currently sixth in the standings, they are clearly the outsiders in the upcoming game against Palmeiras, the current leader of the league.

Simply put, Palmeiras is a much better team and we expect them to prove it in this game, especially since they are in great form at the moment with four wins in the last five games.

Coritiba vs Palmeiras to Draw at Half Time

Although we expect Palmeiras to win this game, we can see this being a much closer outcome than many probably expect. In fact, we can see the two teams being tied at half time.

After all, three of the last five h2h meetings between Palmeiras and Coritiba have been tied at half times, so we can see that being the case once again on Sunday.

Three of the previous five head-to-head duels between Coritiba and Palmeiras have gone under 2.5 total goals, so we can see that happening again in their next game.

Coritiba vs Palmeiras preview: Can the home team surprise the leaders?

Even though they just got back to Serie A after spending one season in Serie B, Coritiba had a very good start of the season and they are currently sitting in the sixth place in the standings with fourteen points from the first nine games in the league. Another positive for the team is the fact that they are almost fully healthy, with Andrey being the only inured player at the club right now.

The reigning champions of South America are having a great start of the season so far since they finished Copa Libertadores group stages with all six wins. In addition to this, Palmeiras is currently second in the Brazilian Serie A and just two points behind Corinthians in the first place. Meanwhile, Jailson and Mayke are on the team’s injury list at the moment.

The highest odds and key figures for Coritiba vs Palmeiras

If you are trying to find the best odds for Coritiba vs Palmeiras, take a look at our list of odds from the main UK betting sites:

The usual questions for Coritiba vs Palmeiras 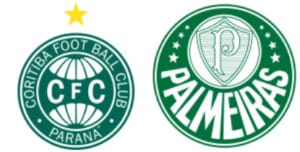