The last game of the upcoming Serie A round is the Coritiba vs Cuiaba duel, so let’s take a better look at this match and some of our free betting predictions for it.

Our latest Coritiba vs Cuiaba betting tips and picks

If you are unsure what is the best bet for the Coritiba vs Cuiaba duel, check our top betting tips for this game right here:

Coritiba and Cuiaba to Draw

These two teams are currently just one point apart in the standings and both of them are dangerously close to the relegation zone, so this game is pretty important for them.

And with both teams in similar forms lately, we can see this game ending in a draw, which would probably make both of them pleased to some extent at the moment.

Coritiba and Cuiaba to Draw at Half Time

Since we expect this game to end in a draw, we can also see Coritiba and Cuiaba being tied at half time, which often happens in matches that end in a draw.

In addition to this, we saw Cuiaba draw at half time in ten of their eighteen games. However, the same only happened twice in Coritiba matches this season, but we can still see the two teams drawing at half time in this game.

Both teams have scored in both of the most recent h2h meetings between Coritiba and Cuiaba, so we expect to see the same outcome in their upcoming duel as well.

On top of this, both teams scored in 56% of all Coritiba matches in Serie A this season, while the same thing happened in 44% of all Cuiaba games in the league until now.

Coritiba vs Cuiaba preview: A very close and interesting duel

After losing four of their last six games in the league, Coritiba dropped down the standings and the are now dangerously close to the relegation zone – just one place and one point ahead of the first team in it. In addition to this, Coritiba currently has four players on their injury list, including Warley, Andrei, Daniel, and Robinho.

With two wins, two draws, and two losses in the last six matches in Serie A, Cuiaba has been pretty inconsistent lately. However, even those results helped them stay out of the relegation zone for now, although they are just two points ahead of America MG, the first team in it. On the bright side, Cuiaba has no injuries and suspensions to worry about at this time.

The top odds, stats, and more for Coritiba vs Cuiaba

If you want to bet on the highest odds for Coritiba vs Cuiaba, take a look at our selection of odds from different UK bookies:

The most common questions for Coritiba vs Cuiaba 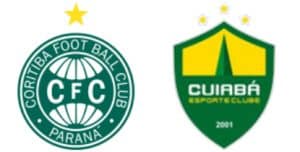