The Corinthians vs Gremio duel is an important one for both teams, so let’s take a closer look at the match and what we can expect to happen in it.

Our top Corinthians vs Gremio betting tips and predictions

If you are unsure what is the best bet for Corinthians vs Gremio, check our free betting picks for this game:

Corinthians and Gremio to Draw

The home team is currently fourth and they are likely to keep this place, but they could lose it if they lose their two remaining matches. Meanwhile, Gremio has to win this game if they are to have any chance of staying up and even then they need other results to go their way.

So, both teams will play to win this match, but we can see it ending in a draw. After all, four of the last five h2h duels between these two teams ended in draws, so we can see that happening again.

Corinthians and Gremio to Draw at Half Time

Since we expect this match to end without a winner, we can also see the teams being tied at half time, as is the case in many of the matches that end in draws.

In addition to this, the last five head-to-head duels between Corinthians and Gremio have been draws at half time, so it would hardly be a surprise if their upcoming match is equal at half time as well.

All five most recent meetings between Corinthians and Gremio have gone under 2.5 total goals, so we can see that happening once again. In fact, only one goal has been scored in those five games overall, so it’s clear that these two teams struggle to score on each other.

The top stats and odds for Corinthians vs Gremio

If you want to bet on the best Corinthians vs Gremio odds, check our list of odds taken from the top betting sites:

Corinthians vs Gremio preview: Can Gremio survive after all?

With three wins and three losses in the last six matches in Serie A, Corinthians have been a bit inconsistent lately. However, the team is still in the fourth place in the standings and they look well on course to get a direct spot in Copa Libertadores next season, especially if they can get a win against Gremio. Ruan and Cantillo will miss the next game with injuries.

Things are looking bleak for Gremio since they need a bit of a miracle to stay in Serie A. At the moment, they are four points away from the first team outside of the relegation zone, so they need to win both of their games and other results to go their way. On the bright side, Gremio won three of their last five games in the league. Also, they have no injured players at the moment. 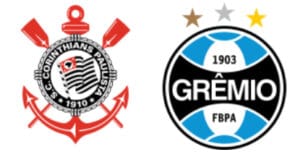