While the Corinthians vs Goias duel might not seem that close on the first glance, this can be a very interesting match. So, check our preview of the game to learn more about it and to get free betting predictions as well.

Our best betting picks and tips for Corinthians vs Goias

If you are trying to decide what is the best bet for the Corinthians vs Goias duel, check our top betting tips for this game right here:

Even though they only won twice in their last six games in the league, Corinthians is still hanging on at the top since they are currently second in the standings. Meanwhile, Goias is in the lower half of the table right now and they have just one win in the last six matches.

With that in mind, and taking into account the fact that Corinthians is hosting the game, we would definitely back them to win it. That being said, Corinthians is struggling with injuries right now, but we don’t see that hurting them enough for them not to win the game.

Four of the last five head-to-head duels between Corinthians and Goias have all gone over 2.5 total goals and that’s why we expect the same to happen in their upcoming match.

That being said, Corinthians averaged just 2.17 goals per game in the league so far, while Goias averaged 2.42 goals per game in Serie A this season. That’s not great, but the recent h2h history between these teams suggest we might see a high-scoring game.

Both teams have scored in the last three h2h meetings between Corinthians and Goias, so we wouldn’t be surprised if that happened once again on Sunday.

In addition to this, both teams scored in 67% of all Goias matches in the league this season, although the same is true for just 42% of all Corinthians games in Serie A until now.

Corinthians vs Goias preview: A tough task for the guests

After sitting at the top for a few rounds, Corinthians fell down to the second place in the standings behind Palmeiras. They currently have 22 points, three points fewer than Palmeiras, and that’s a pretty good start of the season for the team. That being said, Corinthians is currently dealing with injury issues since six of their players are on the injury list ahead of the next game. Also, Roni is out through suspension.

With one wins, three draws, and just two losses in the last six games, Goias has been inconsistent lately, which is not surprising for a newly-promoted team. At the moment, they are just one spot above the relegation zone with fourteen points. Meanwhile, five of their players are on the team’s injury list right now, so that’s another concern for Goias ahead of the next round.

The best odds and important stats for Corinthians vs Goias

If you wish to place a bet on the Corinthians vs Goias top odds, check our list of odds from the main UK betting websites:

The usual questions for Corinthians vs Goias 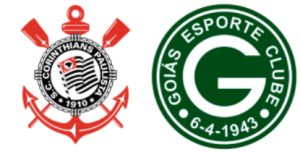