Certainly the derby of the upcoming Serie A round is the Corinthians vs Flamengo duel, so let’s take a closer look at this match and our free betting tips for it.

Our top betting predictions and picks for Corinthians vs Flamengo

If you need some help to find the best bet for Corinthians vs Flamengo, check our favourite betting tips for this duel right here:

Even though Corinthians has been great this season and they are currently five points ahead of Flamengo, we can see the guests taking all three points in this game.

First of all, Flamengo has done much better lately and they enter this game after demolishing Deportes Tolima 7-1 in Copa Libertadores. On top of this, Flamengo beat Corinthians in all five of their most recent matches. Lastly, Corinthians lost 4-0 to Fluminense in the last round of Serie A.

The reason for this lies in the fact that we’ve seen three or more goals in four of the last five h2h meetings between Corinthians and Flamengo, three of which have also gone over 3.5 total goals.

Both teams have scored in four of the previous five head-to-head duels between Corinthians and Flamengo, so we expect the same thing to happen on Sunday.

That being said, both teams scored in just 33% of all Corinthians matches in Serie A this season, while the same is true for 47% of all Flamengo games in the league until now.

It seems that Corinthians has slowed down a bit in Serie A lately, with two wins, two draws, and two losses in the last six games, including a convincing loss to Fluminense in the last round. However, Corinthians is still fourth in the standings and just three points behind Palmeiras in the first place. They also secured a spot in Copa Libertadores quarter-finals by eliminating Boca Juniors after penalties. Another problem for the team is their injury list, with five players currently on it.

After some recent struggles, it looks like Flamengo has found their form since they have three wins in the last four games in Serie A and they enter this game after beating Deportes Tolima 7-1 in Copa Libertadores to secure a spot in the quarter-finals. That being said, Flamengo is still eight points from the very top of the league, so they need to keep that good form going if they want to join the top teams.

The top odds and latest stats for Corinthians vs Flamengo

You don’t have to waste time looking for the best Corinthians vs Flamengo odds – you can find them all right here:

The usual questions for Corinthians vs Flamengo 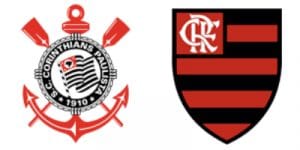