The second stage of Copa Libertadores qualifiers is upon us and we are about to see a few interesting matchups, including the Bolivar vs Universidad Catolica duel. Here’s our preview of the game and some free betting predictions.

Our top Bolivar vs Universidad Catolica betting picks and tips

If you want to be sure what is the right bet for Bolivar vs Universidad Catolica, check our favourite betting tips for this game:

These two teams haven’t met before and it’s tough to say which team is closer to progression, but we feel that Bolivar is at least closer to winning the first leg at home.

After all, Bolivar was very convincing in the first stage of qualifiers and they’ve done very well so far in the first three rounds of Bolivian league, while Universidad has only started their domestic season, albeit with a win in the first round.

In Bolivar’s matchup against Deportivo Lara in the previous stage of Copa Libertadores, we’ve seen nine goals in two matches and both games have gone over 2.5 total goals.

Meanwhile, Universidad Catolica only played one game this season and that game has also gone over 2.5 total goals. So, we expect to see at least three goals in this game as well.

Since we expect this game to end with three or more goals being scored, it’s logical to expect both teams to score as well, although we do expect Bolivar to do most of the scoring.

That being said, both teams have scored in just one of the four matches played by Bolivar in all competitions this season, but we did see both teams scored in the match played by Universidad in the first round of Ecuadorian league.

The team from La Paz was fourth last season in Bolivian Primera Division, so they had to go through the first round of qualifiers for Copa Libertadores in which they eliminated Deportivo Lara with a couple of wins. In addition to this, Bolivar also won two of the first three games in the new season of their domestic championship, so they’ve won four of the last five games in all competitions.

The Ecuadorian league has just started and Universidad Catolica managed to win their game in the first round. Last season, the team was third in the aggregate standings, behind Independiente del Valle and Emelec, but also ahead of the most decorated team in the country Barcelona. In any case, the team has a good chance to get to the final stage of Copa Libertadores qualifiers since they will play against Bolivar, a team of similar quality.

The highest odds and key stats for Bolivar vs Universidad Catolica

If you are looking for the top odds for Bolivar vs Universidad Catolica, take a look at our list of odds from the main UK bookies: 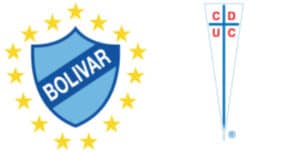