A very exciting and close matchup in Serie A is ahead of us, the Bahia vs Gremio duel. With that in mind, we have prepared an in-depth preview of the match for you, along with some free betting tips.

Our top betting predictions for Bahia vs Gremio

If you are struggling to decide what is the right bet for the Bahia vs Gremio duel, check our favourite betting picks for this match:

Although they seemed destined for a move to Serie B, Gremio managed to win three of their last five games to come within four points from the first team outside of the relegation zone, four rounds before the end of the season.

Meanwhile, Bahia has one point more than Gremio and one game less, so they also need a win here if they want to survive in the top flight. But with Gremio in better form and with Gremio beating Bahia in four of their last five h2h duels, our prediction is for Gremio to win this game.

Four of the previous five head-to-head duels between Bahia and Gremio have gone under 2.5 total goals, so we would be surprised to see a different outcome in their next game.

Both teams have scored in just one of the previous five meetings between Bahia and Gremio, so we don’t expect them both to score in this game either.

In addition to this, both teams have scored in just 33% of all Bahia matches in the league this season, while the same thing is true for just 39% of all Gremio games in Serie A so far.

The latest odds and key stats for Bahia vs Gremio

If you wish to bet on the best Bahia vs Gremio odds, check our selection of odds from the top betting sites in the UK:

The most common questions for Bahia vs Gremio 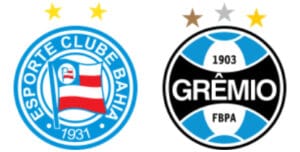