The next round of the Brazilian Serie A brings us a few interesting matches, including the Avai vs Sao Paulo duel. So, let’s take a closer look at this game and some of our free betting predictions for this duel.

Our latest betting tips and picks for Avai vs Sao Paulo

If you are struggling to find the right bet for Avai vs Sao Paulo, take a look at our top betting predictions for this game:

After the first eight rounds of the new season, Sao Paulo is sitting at the fourth spot in the standings, two points behind league leaders Palmeiras. Meanwhile, Avai is 14th, but they’ve lost three games in a row now.

With that in mind, we can see Sao Paulo winning this game against the newly-promoted team. That being said, Sao Paulo failed to beat Avai in their last three h2h duels that Avai hosted.

Although we’ve seen three or more goals in just one of the last five h2h meetings between Avai and Sao Paulo, we can see that being the case on Saturday.

Both teams have scored in just two of the last five head-to-head duels between Avai and Sao Paulo, but we can see both teams scoring in their upcoming match.

The reason for this is simple – both teams scored in 62% of all Avai matches in the league so far, while the same is true for a whopping 88% of all Sao Paulo games in Serie A this season.

Avai vs Sao Paulo preview: A tough matchup for the home team

The newly-promoted team had a solid start to the new season in the top flight of Brazilian football. At the moment, Avai has ten points from the first seven games and they are sitting in the middle of the standings. That being said, they also had a relatively easy schedule so far and all three of their wins have come from home games.

After the first seven rounds in Serie A, Sao Paulo has twelve points and that’s enough to put them in the third place in the standings. Of course, it’s still way to early for any predictions, but Sao Paulo has a team that could fight for the top. Meanwhile, the team will be without Andres Colorado and Gabriel Sara in the upcoming round of the Brazilian league.

The latest odds, stats, and more for Avai vs Sao Paulo

You don’t have to spend a lot of time looking for the top Avai vs Sao Paulo odds – you can find them all right here, on our website: 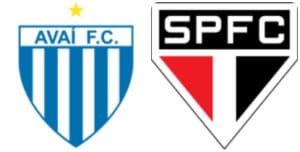