The last match in the upcoming round of Serie A is the Avai vs Fortaleza duel. With that in mind, let’s take a closer look at this game and what we can expect from it.

Our free betting predictions and tips for Avai vs Fortaleza

If you need a bit of help to find the best bet for Avai vs Fortaleza, check our top betting tips for this match right here:

Even though Avai is currently seven points ahead of Fortaleza, who is sitting at the very bottom of the standings right now, we can see the guests taking three points from this game.

First of all, Fortaleza is a much better team than their form suggests and they’ve managed to stabilize lately since they have a win and a couple of draws in the last three games. Also, Fortaleza beat Avai in their last three meetings, so we can see that happening again in this game.

Avai and Fortaleza to Draw at Half Time

Although we expect Fortaleza to win this game, we certainly don’t expect them to have an easy job. After all, Avai has done very well so far and Fortaleza will have to do their best to beat them.

With that in mind, we can see the two teams being tied at half time, especially with Avai drawing at half time in three of their five home games and Fortaleza doing the same in all four of their away games in Serie A this season.

Both teams have scored in two of the previous four head-to-head duels between Avai and Fortaleza and we expect to see the same in their upcoming match as well.

After all, both teams scored in 64% of all Avai matches in Serie A this season, while the same is true for 55% of all Fortaleza games in the league thus far.

Avai vs Fortaleza preview: Can Fortaleza move up from the last place?

After four losses in the last five rounds, Avai finally managed to get a win in the last round against Botafogo. With this win, the team climbed out of the relegation zone and they now have fourteen points from the first eleven games. Meanwhile, Bressan, Bruno Silva and Jean Pyerre are injured right now and will miss the upcoming game.

Although they are without a loss in the last three rounds of Serie A, Fortaleza is still sitting in the last place in the standings with just seven points from the first eleven games. Contrary to that, Fortaleza surprisingly managed to get to the Top 16 stage of Copa Libertadores. So, their fans can be hopeful and expect the team’s form to pick up in the league as well. Tinga, de Vargas, and Depietri are out through injuries right now.

The latest odds and useful stats for Avai vs Fortaleza

If you wish to bet on the highest odds for Avai vs Fortaleza, take a look at our list of odds from the main UK betting websites:

The most common questions for Avai vs Fortaleza 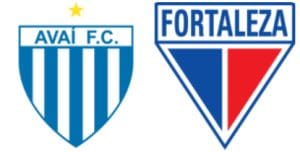