One of the closest matchups in the first round of Copa Sudamericana group stages is the Atletico Goianiense vs LDU Quito duel. So, we have prepared a detailed preview of this game for you and some free betting predictions.

If you can’t seem to decide on the right bet for Atletico Goianiense vs LDU Quito, take a look at our top betting tips for this game:

Even though the new season in Serie A did not start yet, Atletico Goianiense is in great form since they’ve been playing in the regional Campeonato Goiano, which they’ve won.

Meanwhile, LDU Quite has ten points from the first six games in the Ecuadorian league, which is solid. Still, Atletico Goianiense is clearly in better form and they are playing at home, so we would go with them in this match.

It’s tough to determine how a game could go in terms of goals when two teams are meeting for the first time, which is the case here. Despite this, we expect to see three or more goals.

Since we expect to see at least three goals in this game, we also expect both teams to chip in to the final tally and to combine for those three goals.

After all, both teams scored in four of the last five Atletico Goianiense games across the board, while the same thing happened in three of the last four LDU Quito games in their league.

After they finished last season in Serie A in the ninth place, Atletico Goianiense will once again play in the group stages of Copa Sudamericana and they will likely hope to progress from their group this time around. The team has played in the regional Campeonato Goiano so far since Brazilian league has yet to start and they’ve won that competition with a double win against Goias in the final.

In the first six rounds of the new season in Ecuadorian league, LDU Quito has three wins, one draw, and two losses and they share the second place right now with a couple of other teams that also collected ten points so far. Last season, LDU Quito reached the quarter-finals of Copa Sudamericana, so they are probably hoping to get at least that far once again.

If you want to bet on the latest Atletico Goianiense vs LDU Quito odds, you can check them all out right here:

Q & A for Atletico Goianiense vs LDU Quito 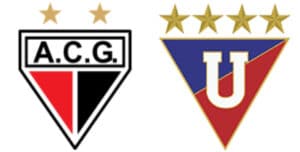