Our Best Betting Tips and Predictions for Sivasspor vs Gaziantep FK

The Brave failed to win the TFF Super Cup after losing to Trabzonspor. The away team had a good pre-season but will need to step up their game. To set the right bet for Sivasspor vs Gaziantep FK, read about our predictions and betting tips for free:

We expect Sivasspor to debut with a win at each. Despite their poor showing in the TFF Super Cup, they have one previous official fixture. The visitors have only played a few friendlies, so they are likely to struggle to develop their style against The Brave.

Both teams still need time to consolidate their style of play and to define their best line-up. So we are likely to see a lot of goals in this first matchday. In the pre-season for both teams, over 2.5 goals were common.

Both teams had some lapses in the defensive line, because of which they conceded a lot of goals during the preseason. We think that each team will take advantage of the opponent’s mistakes to score their first goal in the tournament.

Will The Host Bounce Back From Their Super Cup Defeat?

The Brave did not have a pre-season full of unconvincing results. In addition, they started the season by playing in the TFF Super Cup against Trabzonspor, which confirmed the existence of some problems in the performance of the team led by Riza Calimbay.

Trabzonspor were last season’s league champions, while Sivasspor won their first ever title by winning the Turkish Cup. Both had a similar percentage at keeping ball possession, but the Black Sea Storm took advantage of every opportunity and scored four times, and kept a clean sheet.

GFK had an acceptable pre-season, in five matches they won two, drew two, and lost one. However, they have not played an official match since the last matchday of the previous tournament.

The coach Erol Bulut hopes at least get a point from their visit to GFK in order not to start the season with a defeat. The goal this year will be to improve on the fourteenth place achieved in the previous season and will try to finish at least in the top half of the table.

Our Latest Analysis of Sivasspor vs Gaziantep FK Stats and Odds

If you want to bet on the top odds for Sivasspor vs Gaziantep FK, check our selection of odds from the best betting sites:

Your Questions for Sivasspor vs Gaziantep FK 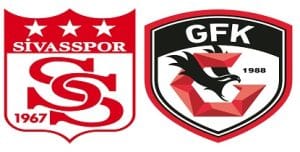 Who is the host? Sivasspor is the host at Sivas Arena Stadium in Sivas

Who is the bookmakers’ favourite to win? The more probable winner is Sivasspor at 1/1 (2.00) Odds