The next match we will cover is Shrewsbury vs Burton, and if you want to see additional League One predictions and odds, you can check out our latest articles.

After checking out the Shrewsbury vs Burton fixture, these are the betting tips and predictions we came up with:

These odds are from Betfred and were correct at the time of writing. So, check your bet slip before confirming.

On Saturday both squads will be at full force because there are no injured or suspended players on both sides. Considering that three of the last five head-to-head games between the teams ended in draws, we thought of it as a tip, but Shrewsbury’s recent form is considerably better than Burton’s. This led us to believe that there will be a winner on Saturday, rather than the match ending in a draw.

We also believe there will be many goals scored on Saturday because of the recent match histories of both teams. We will have to wait and see if we were correct about this statement.

The statistics below are very important and you should review them if you plan to bet on the Shrewsbury vs Burton match on Saturday. 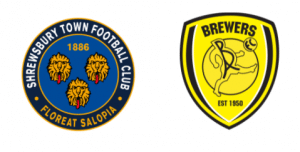